At the close of World War II, National Garden Clubs (called National Council of Garden Clubs at the time), like other public-spirited groups, was seeking a suitable means of honoring our service men and women. Garden Club members visualized a living memorial, preferring to help beautify and preserve the country these men and women had fought for, rather than build stone monuments in their honor. 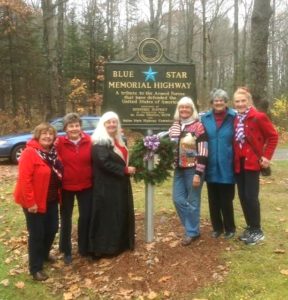 In 1944 it was proposed that one thousand flowering dogwood trees would be planted along five miles of highway in New Jersey, which had been designated the Blue Star Drive by the Legislature. No billboards were to be allowed on the memorial stretch. The project was named for the blue star in the service flag, which hung in windows of homes and businesses to honor service men and women.

In 1947 Route 1 was designated as Maine’s Blue Star Memorial Highway. This covered 546 miles from Fort Kent to Kittery.

While originally begun to honor World War II veterans, the mission was enlarged in 1951 to include all men and women, who had served, were serving or would serve in the armed forces of the United States.

In 1981 the new entrance to Maine Veterans Memorial Cemetery in Augusta was designated a Blue Star Memorial Highway.

Kennebec Valley Garden Club maintains two Blue Star Memorial Highway markers one at the entrance to the Veteran’s Cemetery in Augusta, and one at the Arnold Lookout in Hallowell.