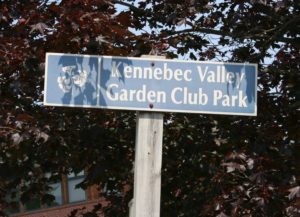 The Kennebec Valley Garden Club Park is a two acre area off University Drive in Augusta, which began as a vision in 1973 between Paul Poulin, Augusta City Manager, and Elsie Pike Viles a member of the Kennebec Valley Garden Club and Chair of the Civic Development Committee, as a way to keep forever green that plot of land.  The park consists of a one acre pond and surrounding the pond a one acre green space.

At that time there was no zoning in Augusta and the objective was to create green space in what would ultimately become an urban area.  In August 1973 members of KVGC approved the newly named Environmental Improvement Project which was to create a park for all the citizens of Augusta to enjoy.

Lyle Littlefield, horticulturist at the University of Maine Orono, was engaged to design the park and submitted a blue print in September 1973.  Planting began in the spring of 1974, including trees, shrubs and daffodils.  Planting continued through 1980 with more tree varieties, lilacs, rhododendrons, roses and various spring bulbs.

In 1980 several large rocks were brought in with the largest rock engraved with the official name Kennebec Valley Garden Club Park, by order of the Augusta City Council [No. 494] 16 June 1980, this being a green space in perpetuity. 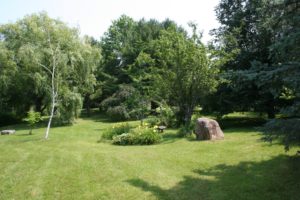 The dedication was a gala event. The National Guard provided 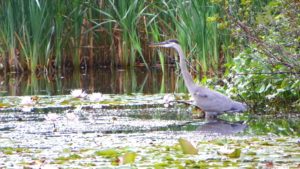 a huge tent, which was decorated with hundreds of roses (a gift from a local florist), audio equipment was loaned by University of Maine, there was television coverage by the local station and dedicatory speeches by notables. 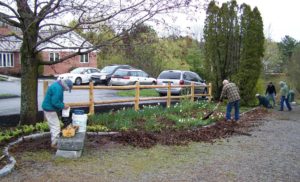 The park itself would not be here today with out the work of many including the City of Augusta, UMA students and teachers, Capitol Area Vocational School students, Boy Scouts, Garden Club members and other citizens interested in maintaining one of Augusta’s best kept secrets.

The improvements undertaken in October 2015, would not

have come to fruition with out the assistance of the Maine Realtor Association, DR Struck Landscaping and the members of the Kennebec Valley Garden Club.  At the June Annual Meeting the members of KVGC voted to discontinue to be responsible for the Garden Club Park.